If the fast electrons incident on entering a heavy target (a metal piece of high atomic weight & high melting point) X-rays are produced. 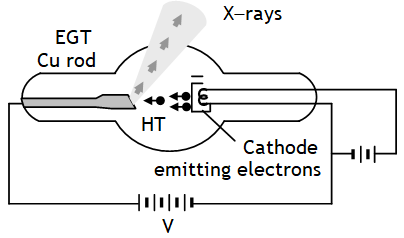 Coolidge tube is used in the production of X-rays. It is a hard glass evacuated tube (EGT). One end of the tube has a tungsten filament emitting fast moving electrons (also called cathode rays), while the other end contains the heavy target (HT).

A p.d. » 20 kV is maintained between the cathode and a metallic target accelerates the electrons toward the latter.  In the Coolidge tube it is necessary to maintain vacuum of high order (P = 10–6 cm of Hg) so that the electrons may not lose energy due to the collisions with gas atoms. Majority part of the KE of the incident electrons is wasted in heating the anode & hence the X-ray production requires targets with high melting such as tungsten. Also cooling of target is required. The efficiency of production of X-rays less than 1%.