^Motion on a rough inclined plane

Consider a body placed on a rough inclined plane.

The y component of the gravitational pull mg cosθ presses the plane & is balanced by normal reaction from the plane, thus N = mg cosθ.

The x component of the gravitational pull mg sinθ (say, F) tends to move the block down the plane, but can do so, only if it exceeds the limiting friction (fL = msmg cosθ) on the block.

As the inclination θ is increased mgsinθ increases while the limiting frictional force (mS mg cosθ) decreases. At one stage, mgsinθ & mS mg cosθ become equal & balance each other then the body placed of the inclined plane at the verge of motion. If the block at this stage is given some velocity it will keep sliding down at constant velocity.

This angle θ is called angle of repose & abbreviated by

Also we can make following conclusions

When seen from inertial frame two types of forces act is a circular motion, one that changes speed & the other that changes direction.

A force that acts tangential of velocity changes the speed only, called tangential force. Its

magnitude is given by

A force acting normal to velocity towards turning centre, along the radius & changes direction is called centripetal force or radial force. 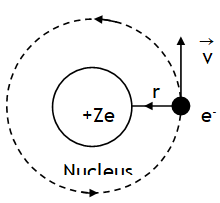 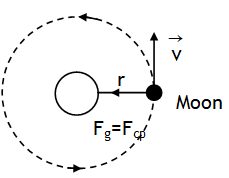 Magnitude of centripetal force on a mass moving with velocity v in a circular path of radius r at constant speed (i.e. uniform circular motion) is 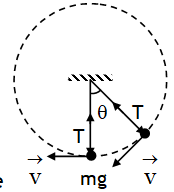 Basic building blocks of digital electronics made of semiconducting material & used to control the flow of information from input to output in a logical manner & are used in calculators, digital watches, computers, robots, industrial control systems, and in telecommunications. 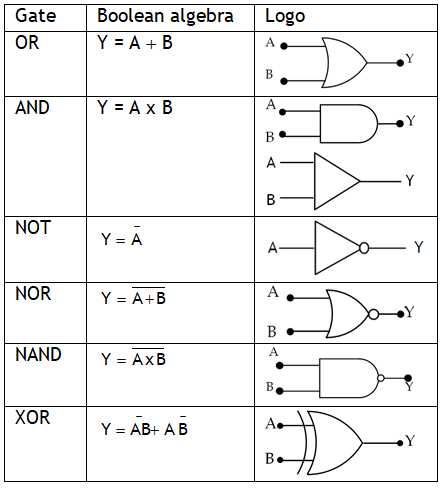 Semiconducting devices are the basic building blocks of all the modern electronic circuits & have following advantages over conventional vacuum tubes: 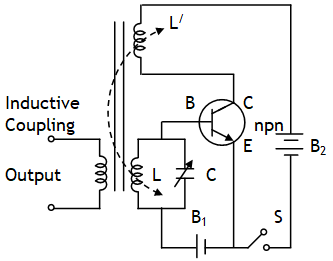 & amplitude without requiring any external input signal. It converts dc energy obtained from a battery into ac energy in same oscillatory circuit. 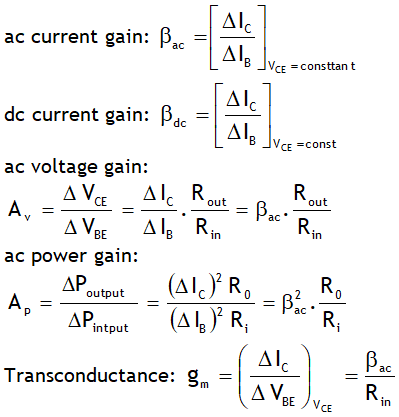 As β > > α, thus the ac power gain of a CEA is much larger than that of a CBA. Remember the transistor is not generating any power. The energy for the higher ac power at the output is supplied by the battery.

Both the junction are forward biased & here IC is maximum & does not depend on the input current IB. 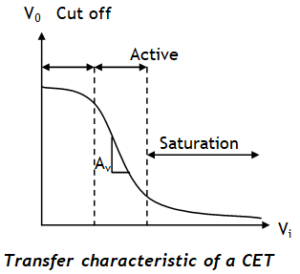 Relation between α and β:

The CE configuration is frequently used as it gives high current gain as well as voltage gain. 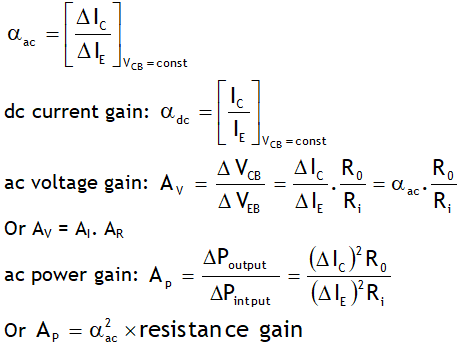 It is a specially designed junction diode, which can operate in the reverse breakdown voltage region continuously without being damaged.  In forward bias behaves like ordinary diode.  Zener diode does not gets damaged at breakdown voltage, but it does so at some higher reverse voltage, known as its ‘burn out value’. The magnitude of zener voltage VZ can be decreased by increasing doping level in p and n type materials of zener diode.

I – V characteristics of a Zener diode are as shown. For a voltage more than zener breakdown voltage current through diode increases without increase in voltage across it. This feature is exploited to provide voltage stabilization across a circuit. 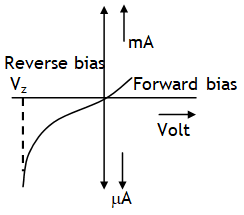 Suppose a load RL connected between a & b is connected to a fluctuating dc voltage supply Vs between c & d. Let the load can’t tolerate a voltage VL but the supply Vs can be more than VL. To protect the load from any increase voltage a zener diode of breaking voltage VZ = VL is connected to the input supply with a safety resistor RS in the input loop.

If at any time VZ increases than VL the zener diode works in the breakdown region increasing the current through it without increasing the voltage across it & thus the load always remains protected. 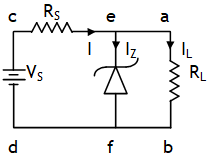