All material microscopic particle have dual nature, i.e. they can behave like particle as well as like a wave. Wavelength associated with a particle of momentum p is given

de Broglie waves are also known as Matter waves, pilot waves, stationary waves or probability waves. Theses are neither mechanical (as can be propagated even in vacuum) nor electromagnetic (as not produced by accelerated charges necessarily).

Using values of h, m & q for an electron one can write:

For a 120 V accelerating potential, the above equation gives λ = 1.12 A0. This wavelength is of the same order as the spacing between the atomic planes in crystals.

In a similar way we can write 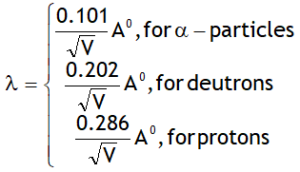