is called relativistic energy or Einstein’s mass-energy equivalence as it reveals that mass & energy are interconvertible.  Here the quantity m0 c2 is the energy associated with the rest mass of the body, K is the kinetic energy of the body & the sum of KE & rest mass energy is called the total energy (E) of the body. 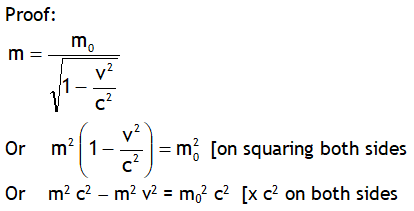 Differentiating this relation we get

Also according to Newton’s second law of motion, force acting on a body is defined as the rate of change of its momentum i.e.

Now if this force F displaces the body by a distance dx, its energy increases by

If particle is accelerated from rest to a velocity v, let its mass m0 increase to m, then its total increase in KE can be obtained by integrating equation (3) , i.e. 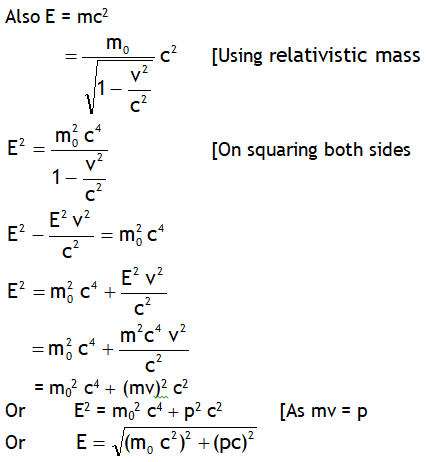 Suppose a body of rest mass m0 moves with a velocity v << c.  Its mass at speed v is 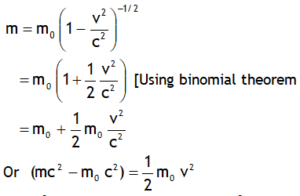 As mc2 is the total energy and m0 c2 is the rest mass energy. Therefore the term (mc2 – m0 c2) represents the kinetic energy, thus KE of the body is

This is the same result that we obtain by classical Newtonian mechanics.

2. An electron and photon have same de-broglie wavelength. Which has more total energy?

3. An electron and proton have same total energy. Which has more de-broglie wavelength?

4. Also KE of a particle is

5. If a photon and electron has same de Broglie wavelength, then the KE of the photon is

times the kinetic energy of the electron.