The appearance of sky from earth at various locations depend on the amount & nature of impurities present in the air & climatic conditions also.

Also it is found that the light scattered

(b) along the direction of incidence is unpolarized, &

On the Moon, there is no blue sky because there is no atmosphere & thus no scattering. Even during the day, the sky is as black as at night, although the Sun and the Earth may be brightly shining. 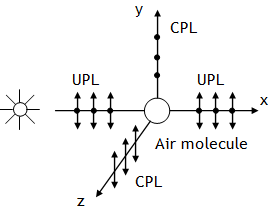