Consider an metal rod heated at one end & cooled at the other end as shown. 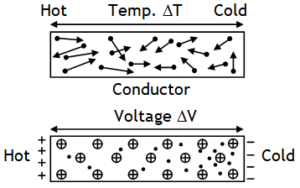 This effect in which a temperature gradient between two points in a material (may be a conductor or semiconductor) gives rise to a built in electric field or a voltage difference between two points. This phenomenon is called the Seebeck effect or the thermoelectric effect.