Potential due to concentric spheres

Consider two identical concentric spheres of radii R1 & R2 carry charges q1 & q2 respectively as shown in the diagram. Then total potential on A & B will be equal to sum of potentials due to charge on A & B & given by 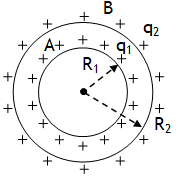 The potential diff. between two surfaces is

From above relation we can say

1.  The potential difference is independent of the charge on the outer sphere.

3. When the two conductors are joined by a thin wire, their potentials becomes same i.e. potential difference between them becomes zero. This is possible only when q1 is zero i.e. actually this will happen only when the entire charge on A moves to sphere B.

4. If q1 is negative, even then entire charge on A moves to sphere B, as we know negative charge moves from low to high potential.

^Point charge ^Field due to sheets Scroll to top
error: Content is protected !!