*Circle The locus of a point P (x, y) which moves in a plane so that its distance from a fixed point is always a constant.  The fixed point is called the centre C (u, v) of the circle and the constant  distance is called its radius (R).

Also a radius of a circle is a straight line joining the centre any point on the circumference. As CP = R, thus using displacement formula we can write

The above expression is called Central form of a circle. 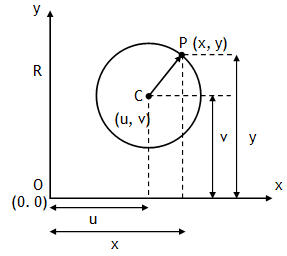 A circle can also be expressed as

This expression is called general form of a circle.

If centre of a circle coincides with origin O (0, 0) then the above expression can be written as,

This expression is called Standard form of a circle.

*Inverse function *Ellipse An ellipse is a closed curve like a circle. An ellipse may be drawn... Scroll to top
error: Content is protected !!